Welcome to my (never complete) GOLDEN LIST with TRANSFRIENDLY venues in the Netherlands! Updated for 2019.
I am particularly reviewing places, (dance) parties, sex-clubs, community events and shops that are welcoming and safe towards transgender people, the genderfluid, genderqueers, non-binaries, transmen and transwomen. This means: if anything happens to a trans client, the organisation or venue will support them. I hope it’s not a problem this whole page is in English. I need to reach as broad an audience as possible and lots of genderqueers I know do not speak ‘Nederlands.’

I am NOT just adding any mixed or gay space here… “Cafe ‘t Mandje” does not belong in this list. Nor does PANN: it’s too unishaped and not queer in the non-mainstream sense. If you’re looking for generic gay spaces, there are plenty of other lists out there on the web. This list could also use some more Fetlife and more intersectional POC input.

However: if you want your venue to be listed: click here, you’re very welcome to ask, invite me and show me how transfriendly you are. Or read about ‘houserules.’
Note: I am looking for a specifically ‘diversity friendly’ or anti-oppression atmosphere, preferably queer but not necessarily so, hard to pin down or explain. The snarky reviews are my personal view so yeah, they can be mean. Also I am (possibly quite wrongly) assuming that places that combine eccentric drag queens, performance art ánd butch dykes are also genderqueerfriendly. 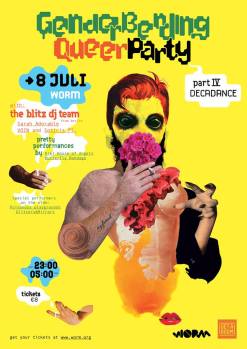 Good practices from the past that are now defunct:
–Antarctica, Amsterdam. UPDATE: now EVICTED squat, keeping it here for good practice; had many interesting cultural events. Queers, activists, students, people from the neighbourhood all together in one very special place. Movies, free up-for-grabs store, poetry, performances, food and dancing. Sadly it was evicted in 2014, but if you friend them on Facebook, you will notice their coregroup still organizes cultural events in pop-up locations.
-Candystore Queerparty, Arnhem, sometimes took place in Willem1 at irregular intervals. Personally haven’t been there and I’m assuming it was more ‘gay’ and mainstream than genderfluid.
–The Ponyclub @De Unie, Rotterdam
-The Ponyclub @Club Zonder Concessies, Rotterdam
–Her Dick @Poortgebouw, Rotterdam. Came with a brilliant zine by its organisers: Elle Bandita and Philippa. Since they left, nothing queer seems to happen there anymore.
–Queer Smear, Utrecht. Irregular Ladyfest-originated queer performance party. The organisation was very transfriendly and genderconscious. The audience not always equally as much… But the organisers were nice and they always asked me to perform, so that’s a good thing.
–Kitty Queers @ ACU, Utrecht. Was the queerest for 10 years. Mostly queer alternative rock. Always lovely and always gendervariant-friendly. Unfortunately they quit. The last party was on march 24th 2012. It seems ‘The Lick’ try to follow their footsteps in ACU.
–Thermos, Amsterdam. Gay sauna. Originally they did not allow people ‘without a penis’ in their venue (because I asked them through email) but after some communication with me, and a long internal discussion, they now officially do!
I went in by myself, before officially asking access, because I had a sex date with a guy who wanted to meet there. I kept on my swimming trunks but I was the only one who did. After a while I decided to walk around in a towel (which is very common there) so I wouldn’t stand out. They had large private cabins across 3 floors so this is where you can undress completely. Although when I was there some pushy voyeurs were really difficult to turn away from the doors while I was having sex in a private cabin with a date.
–Villa Friekens, sadly lost squat somewhere in Amsterdam. The squat from fantasies… Had a queer party only once every 2 years or so, but they are legendary. Don’t talk about where it is. It got evicted in 2015 and would be the final large squat to disappear, meaning an essential part of low-income creativity in Amsterdam is now gone.
–WALP and Wild Side: the women/women S&M kinky events were always very transman- and transwoman-friendly. Wild Side would pair up, once a year, with the men-on-men kinksters from the excellent Vagevuur in Eindhoven, resulting in an incredibly avant garde queer play party. These days you have to travel to Berlin, Seattle or Manchester for this… People from these women/women groups have now completely moved to Fetlife, a kink/fetish social network site. Some of them were involved with BDSMNext which is now also defunct.
–Zsa Zsa Zine, Amsterdam. Feminist gender/queer library, I was part of the initiation of this collective. Every 2nd saturday of the month you could come by. This comic archive center saught to collect feminist, queer and People-Of-Color zines and comics. A space for zinefreaks, comicfans, zinesters, artists, and every one else who loved comics, zines, coffee and cupcakes. You could watch, read, draw, write, paint, cut & paste, eat, drink, hang out or even fall a sleep!

NB: Most cities have nothing at the moment, but used to be booming when there were more squatters. This is a national trend, remember?:
Buttkraaker and ‘Freakndel’, and Havana and the Pink Lighthouse (various squatted venues, all gone), Schijnheilig (evicted squat – now occasionally rents the Vondelbunker) and Antarctica, and De Valreep, het Slangenpand and Villa Friekens, and, and… probably more.

The queer community –needs– autonomous spaces because obviously right now there’s no way to be transfriendly in male dominated gay spaces.
We need accessible spaces for minorities, trans people without papers and poor queers to keep on feeding ourselves with new ideas, away from the mainstream.
If you happen to know of any more mixed, non-heteronormative and genderqueervariantfriendly spaces: let me know in the comments section! Here is a currently updated list of squats – sometimes it’s better to NOT mention the location of a squat in order to keep them safe from evictions.

If anyone has feedback on this list, you can do that anonymously by emailing me, or do it down here by adding comments.

This site uses Akismet to reduce spam. Learn how your comment data is processed.